A wee history
Extracts from

“The Shiskine Golf and Tennis Club – A Short History”

The land for the Golf club was originally part of Drumadoon Farm. Prior to 1900 the port of Blackwaterfoot was a vital link for the Shiskine area. The formation of the golf course on its present site would have been in doubt had the feasibility study for a deep-water pier gone ahead, as the only viable location for it would have been at The Point, adjacent to the present 5th fairway. The accompanying buildings and access road would have rendered the land suitable for commercial use only.

Alexander Boyd, a banker based in Glasgow, is credited as the founder of the club. In June 1896 the club was opened by the then Lord Advocate, Mr Graham Murray. James “Tobago” Currie, the brother of Alexander Boyd’s wife, was farmer-tenant at Drumadoon Farm at that time, and a sub-lease was obtained from the farm. Some years later, following Mr Currie’s death, his wife re-married to John McCallum, the farm grieve, and the lease continued until 1926 at £15 per annum. In 1927 a direct lease with Arran Estate was made. In 1961 the course and the adjacent foreshore were purchased outright for £1000. 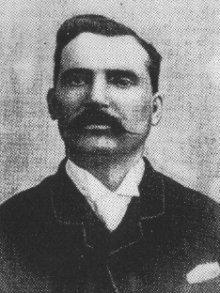 The course architect was Willie Fernie of Troon, a notable golfer of that era, who designed the original 9-hole course. Currently the 5th and 9th holes are the only survivors of the original concept, with the Paradise Tee the only one standing on its exact pristine site, but then played to what our present 1st green.

There is very little recorded activity of the Club before 1909. There is one mention in August 1897, in ‘The Golfer’ which records the par at 30, a perhaps difficult course with the star golfer only managing a +9. The local membership at that time was about 50, with just 10 playing for the monthly medal. No minutes are recorded form 1914-19, but membership was recorded at 112 in 1913, with just 48 by 1917. The Ladies membership remained constant at 50. No golf was played on Sundays until autumn 1974.

An early head greenkeeper was Malcolm Watson, in the records as earning a wage of 21 shillings per week. The first captain was Dr Thomas Rutherford, the local GP. An early vice captain, John Wooley, features in records up to 1921, and is mentioned in records up to 1944. No island resident captain was elected between 1921 and 1980. Another notable member was James Currie, who left for Canada in 1908, but returned to the tenancy of Drumadoon Farm in 1920. He was active until 1926 and then again from 1947, being given honorary membership in 1957. He is commemorated by the creation in 1967 of the Drumadoon Cup for the Autumn Handicap.

In September 1912 agreement was reached to extend the course to 18 holes. The existing 9-hole layout was scrapped and new holes were created, two on the now Crow’s Nest shelf. Six of the holes were on Drumadoon Hill, but during the 1914 –18 war they reverted to their natural state and were later deemed not to be of an acceptable standard. They were seldom played and gradually fell out of use. In 1936 six extra holes were again considered, using land along the back downslope of the Doon. The plan of a 9-hole relief course was abandoned as this would have meant the neutralisation of the farm as a viable agricultural unit.

Willie Park is noted as designing and creating the existing 12 holes, using then unutilised ground, a small slice of farmland, and reclaiming and stabilising semi-beach that had been utilised over the years 1925-28. In early years, after the losses of the 6 moorland holes, 18 holes were achieved by playing the 1st 6 holes twice. Now most competitions are over 12 holes, but when needed for official rules, 1 (13th), 2 (14th), 9 (16th), 11 (17th), 12 (18th) are replayed along with an artificial 15th , using a new tee below the 3rd to the 4th green.

The first ladies competition is recorded for 1905 (concessionary membership fee of 2s 6d), 1910 seeing all-local competitions and introduction of the New Year Mixed Foursome, still played today. Concessionary fees were continued until 1952 when a flat rate £2 fee was introduced, although ladies had no constitutional rights until 1977. In 1981 an application made to the L.G.U. was approved and new tee markers were set. The first official Ladies Championship was in 1989.

In a fierce 1991 storm, ten yards of grassy beach-head, the entire length of the Road hole, was washed away. This continued to be an ongoing problem. In 1996 help was requested from the R & A. This came in the form of a loan for the emplacement of gabions along most of the beach perimeter.

The course throughout its history has always been fully utilised during the summer season, but the combination of increased wealth and the spreading (and lengthening) of holidays has led to year round demand. As a result of improved practices and mechanisation (not to mention downright hard work) on the part of greenkeepers and administrative staff, today the course is open for play all year round, excepting the most inclement of weather.

In 1997 Golf Monthly magazine voted Shiskine the 77th best course in the UK and Ireland. Mention of the club and its then forthcoming centenary, was also made by Peter Alliss during commentary of the 1995 Open Championship.

The book from which these extracts are taken is available from the club, priced £5 plus postage.